Vector Pens Emotional Message In Remembrance of His Late Dad

The freestyle emcee who lost his dad in July 2017 is known to speak highly of his father, who was a police officer.

Taking to his instagam today, Monday 5th of July 2021, the rapper penned down an emotional message alongside a picture of him crying, reflecting on some of the legacies his father left before he died.

According to the rapper, a dead person only rests in peace if they have done good deeds before their death. He wrote:

I had a court case at a time, I lost everything I had (and I hate asking for help from anyone… even my own parents 🤦🏾‍♂️). My Dad walked into the court room on the day set for hearing and my lawyer in that case lost his shit. “That’s the man I was telling you about all these years” he said to his partner next to him. His friend was killed in a failed brake accident in ibadan (I think) and when they got there, they were going to shake the driver with all their might and connections but my dad welcomed them in his office and asked if he could read them some Bible passages before they commenced discussions. They left the office letting go. He didn’t see my dad anymore till the day i had a court case where he represented me in and my dad walked in. I learnt about resting in peace from the life my dad lived. To say “ rest in peace “ is a lie if the person who died didn’t leave good memories of him/herself. If you wonder where my Confidence comes from, it is in knowing the son of whom I am. you have seen me smile many days, see me cry… Today is different. Teslim. 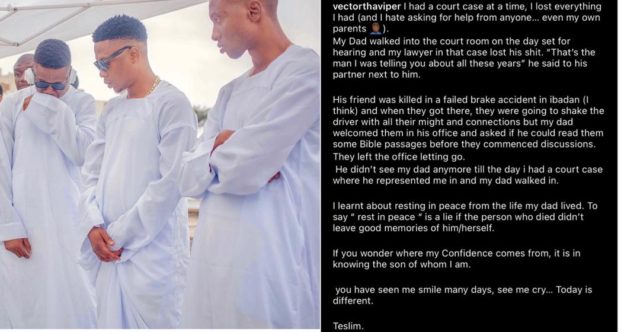 Vector in respect of his father has named is incoming album ‘T.E.S.L.I.M” after dropping ‘Vibes before Teslim’.

We continue to pray that he finds the strength to bear the loss.