Nigerian superstar, Wizkid has been named the winner of the 2021 Best African Act Awards at the MTV EMA and his fans are very excited as per their reactions.

Wizkid won the Best African Act award for the second time at the MTV EMA tonight and the reactions capture the visible excitement of his fans. The show was held on Sunday, the 14th of November 2021.

Wizkid was nominated in the Best African Act category at the 2021 MTV EMA alongside fellow Nigerian, Tems as well as Diamond Platnumz, Amaarae, and Focalistic. Wizkid and Tems both have one of the biggest songs in the world together with Essence. The song was one of the songs off Wizkid’s Made in Lagos album that is gaining global acceptance right now.

In the reactions, Wizkid’s fans were really excited with the news of the singer grabbing his second win at the prestigious MTV EMA Awards. The singer has a total of 7 nominations and has won 3 awards at the show. In 2016, he singlehandedly won the Best African Act and Worldwide Act awards. His exploits on the international scene this year ensured he beat all the other contenders to yet another award. 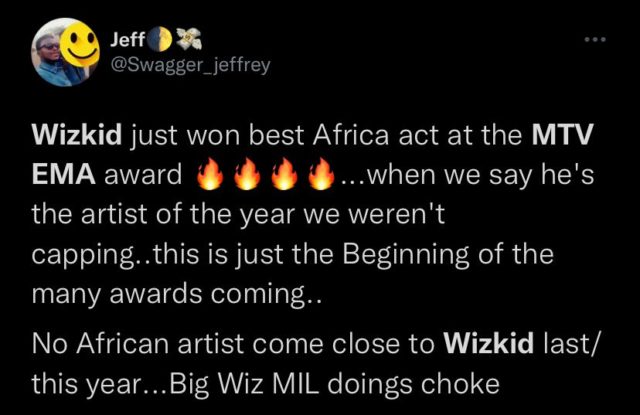 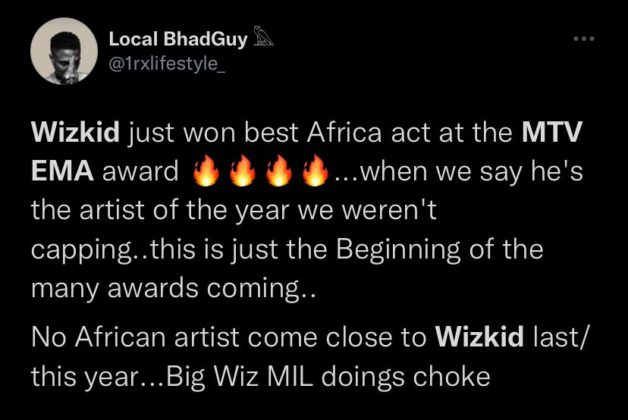