Blaqbonez Reveals Text Gotten From His Landord About New Video

Nigerian rapper, Blaqbonez has revealed the text message he got from his Landlord after he requested for his rent to be doubled in a recent video he shared via social media.

Blaqbonez shared a recent video on social media where he stated that he wants his Landlord to increase his rent and the latter has now replied via text message. He shared this via his Instagram stories on Friday, the 3rd of December 2021.

Blaqbonez has been known not only for his unique rap style but also for his unique promotion style. The Chocolate City rapper makes use of his humor in videos shared via social media as a promotional tool for his new songs, albums and videos. These videos turn out to be viral material sometimes, just like the last video he shared via Instagram.

READ ALSO: Read Blaqbonez’ Testimony After Opening For Wizkid at the O2

Blaqbonez who recently opened for Wizkid at the O2 Arena in Londonsaid in one of his recent videos that he wants his Landlord to double his rent as he has been winning a lot this year. Few days after the video, the rapper returned to post the text message he got from his landlord which was equally hilarious. 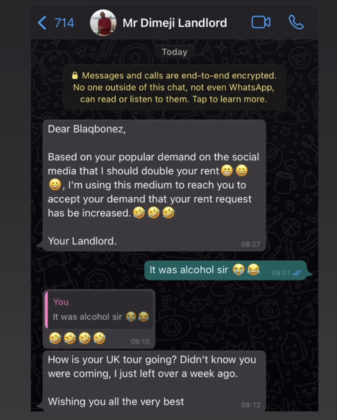