The South African rapper called out veteran actor Patrick Shai for insulting his mother in a video.

The popular actor, Patrick Shai, whose video is trending on social media, saw him insult Cassper Nyovest’s mother and as well challenge the heavyweight rapper to a boxing match. In the video, he said:

This is the elder Patrick Shai. I want to meet you in the ring. I want to beat you boy. Before I die i want to make sure that I have beaten you. On my tombstone I want it to say this is the man who made Cassper Nyovest soil his pants. I will beat you. Give me that respect. You son of a b**ch

What did Cassper Nyovest do/say to the old man? 😭 pic.twitter.com/Pk1Lq4zA6K

Reacting to the video, Cassper Nyovest, who recently beat up a YouTuber who trolls him on the internet, slammed the veteran actor, warning him to keep his mother and family out of his mouth.

Putting out a series of tweets to respond to the actor, some of them read:

Who the f*ck is that old man and why is he calling my mom a b**ch? Why does my family have to be disrespected like this yo? F**k this is too much now!!! Modimo nna ha ke sa kgona, ke kopa thuso, translates to (God I can no longer, I ask for help) 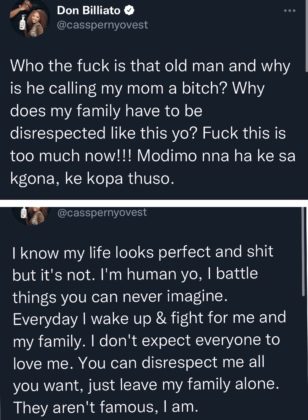 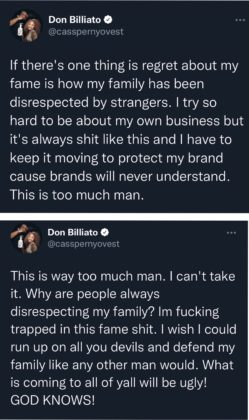