Nigerian superstar, Wizkid has dropped new hints that suggest that a new music video is on the way from his Made in Lagos album.

Wizkid shared a shot from what looked like a new video, hinting that a new music video is on the way from his last album. He shared this via his Instagram stories on Tuesday, the 14th of December 2021.

2021 has been great for Starboy with his song, Essence smashing its way into the global scene and that definitely came with awards. Wizkid has already been nominated for the 2022 Grammy Awards in two categories, and he is ruling most of the Billboard charts at the moment. This has been the best year for African music in a long while, and Big Wiz is championing that movement. All this is due to the success of his 2020 album, Made in Lagos which housed Essence and smashed many records this year.

Sharing a new shot of what looks like a new music video via his Instagram story, Wizkid dropped the hint with his accompanying caption. The caption is mainly emojis that suggest the singer might be dropping a new video soon. 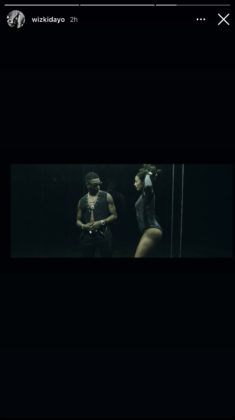