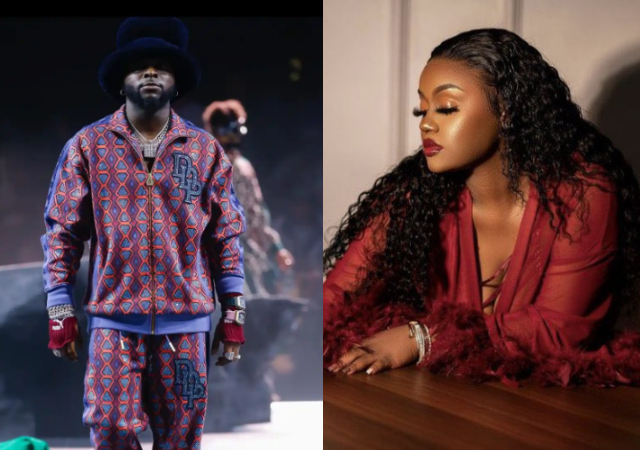 Eniola compared their relationship to that of legendary singer, Innocent Idibia better known as 2face or 2Baba and his actress wife, Annie Idibia

A Twitter user identified as ‘Eniola’ has advised Chioma Rowland, the fiancée of music star, Davido on her relationship with him.

The ‘power couple might be tying the knot in 2023.

This comes as Davido dropped the hint while he was away in London, on a visit to famous clergyman, Pastor Tobi Adegboyega.

In a video on social media, pastor Adegboyega was seen hugging Chioma’s while saying “our wife, our real wife” and Davido responded by saying “hundred percent, going down 2023″ which indicates that he may finally be tying the knot with his baby mama.

Reacting to the spark of love between Davido and Chioma, Eniola compared their relationship to that of legendary singer, Innocent Idibia better known as 2face or 2Baba and his actress wife, Annie Idibia.

“I heard Davido And Chioma will be getting married in 2023…

“Congratulations to them but hope Chioma can stand the heat because we don’t want another Annie in our face”.

Reacting to what Eniola tweeted, Netizens slammed her and asked her to mind her business.

@gorgeous lif3style3: She’s another Annie but which one concern anyone? She go cry for private jet. Others cry in keke. Abeg

@adorable_bee: now everybody is hailing chioma, asking people to mind their business when she turn to Annie idibia now it’s still you people that will drag the hell out of her

@mercy_prettyhotslim Chioma will never come online to rant like annie…. All the previous drama did you ever hear her make video to shout or even throw shades?

@iheanacho_peace16 If we check this girl well now her boyfriend fit get 2 other girls wey he still dey toast, Annie really give una Wetin to talk about.

@chiiblez The same people that mocked her saying Assurance have turned to endurance and now that Assurance is about to happen instead of being happy they have changed it to we don’t want to have another Annie in our hands, human beings are two faced.

“She Introduced Me to Drugs, turned me to slave and Has Been Threatening My Life”- Annie Idibia’s Elder Brother, Wisdom Cries out for Help

“She Introduced Me to Drugs, turned me to slave and Has Been Threatening My Life”- Annie Idibia’s Elder Brother, Wisdom Cries out for Help