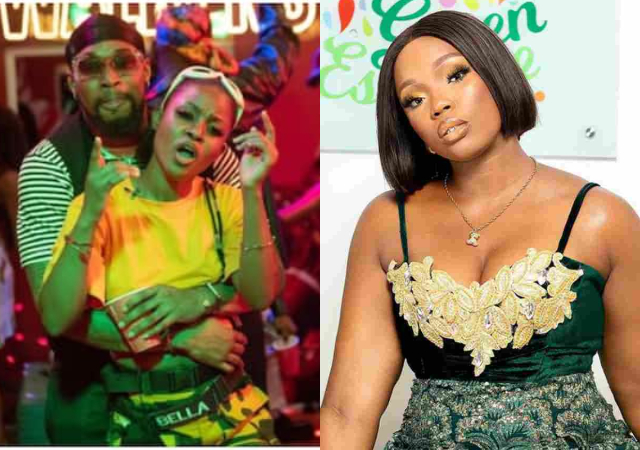 Bambam, has become a trending topic on social media after she was heavily dragged Bambam noted that she feels Sheggz’s relationship with Bella was a strategy while she was already deeply in love Shella shippers quickly fired back at Bambam and brought up old videos from her time in the BBNaija house

Former BBNaija housemate, Bambam, was heavily dragged on social media by fans of Level Up stars, Sheggz and Bella.

Bambam was one of the guests on The Buzz, a show hosted by Toke Makinwa to speak on the happenings on the BBNaija show.

The Double Wahala star was asked of her opinion on Sheggz and Bella’s relationship and her take did not seem to please the ‘Shella’ shippers.

The influencer revealed that she really feels bad for Bella because to her, it looks like Sheggz knows it is a game but Bella does not seem to think so and is lost in it.

According to Bambam, Bella might need therapy after the show. She also noted that Sheggz’s actions on the show is how he is because a person cannot pretend for that long.

She said: “I really feel bad for Bella, she may need therapy after the show. It looks like the man knows that this is a game and he’s got his game face on but she is too naive to see that it is a game for him and she is really lost in it.”*

Bambam also said: “This is who he is because you can’t pretend that long. At the same time, he knows it is a game but I don’t think he plans on taking her seriously because you can’t be that mean expect he just enjoys torturing women.”

Not long after Bambam’s take on Sheggz and Bella’s relationship made the rounds, a number of people came down har*d on the Double Wahala star. *

Netizens were quick to remind her that she was a pastor’s daughter who did things in the toilet with Teddy A during her set while a few others defended Bambam and noted that she said nothing but the truth about Sheggz and Bella.

Some comments culled below:

antheia_beautynails Are sane people trying to defend Sheggz attitude and emotional blackmail towards Bella? Like really?

realchi____ Person wey dey live for glass house don throw stone funke_oyinbo She said the truth !!!!! Stop bashing her . She was asked a question and she gave her opinion !

Bambam And Teddy A Expecting Their Second Child, A Baby Boy

Bambam And Teddy A Expecting Their Second Child, A Baby Boy