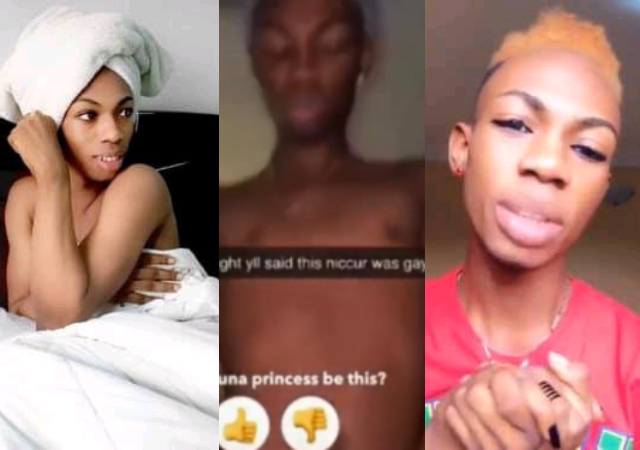 When Nigerians thought they were done with the issue of s3xtape which was centered around Nigerian Entertainers, Tiwa Savage, Oxlade and Buju in recent years, James Brown is in the news for the same reason

James whose sexuality has always been under scrutiny because of his dressing and pronouns, was captured having sexual intercourse with a woman in the released sex tape

Controversial crossdresser, James Brown is currently the number one trending topic on Twitter NG after he had his sex tape released from an anonymous source.

The content creator, whose sexuality has always been under scrutiny because of his dressing and pronouns, was captured having sexual intercourse with a woman in the released sex tape.

The exposure of his sex tape did not in any way deter James Brown, instead he came out to publicly denounce being gay and remind everyone that he had a girlfriend.

His video has sparked reactions from netizens. Read some here:

@_asiwajulerry wrote “James Brown and Bobrisky are just using LGTV to Cashout, James brown wey even look like Pesin wey go like punah too much 😂😂”

@olamide0fficial wrote “James Brown is just using cross dressing to garner fans and make money. He saw an opportunity and capitalized on it. We live in a world where people will play any card just to fool people and cash out big time. Na mumu dey believes everything on the internet.”

At the time of filing this report, James and his team are yet to release an official statement on the development, but Nigerians have taken to their social media space to react to the development.

BBNaija: Cooking was 20% of my strategy – WhiteMoney

BBNaija: Cooking was 20% of my strategy – WhiteMoney