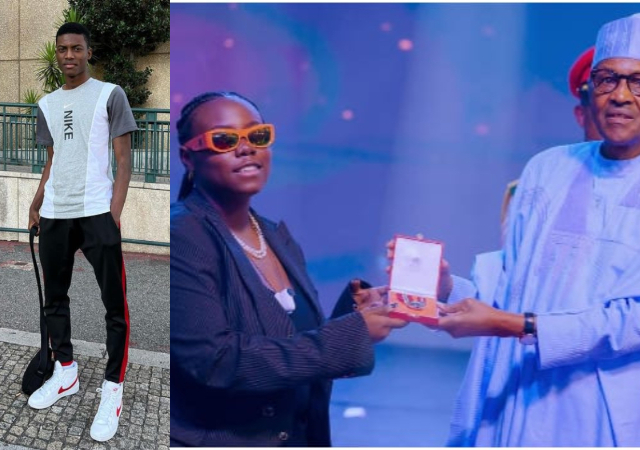 Abba Bichi, a footballer and son of Director General of the Department of State Security Service (DSS) Mr. Yusuf Magaji Bichi, has called out singer Teni over her composure while receiving her Member Order of the Niger (MON) award at the National Honors Award, yesterday, October 11th.

Abba Bichi in his Instagram post described Teni as an “Orobo with zero sense” while accusing her of not respecting President Muhammadu Buhari by bowing while receiving her award.

Nigerian footballer, Abba Bichi has blasted singer Teni over her disrespect to the president.

The female singer has been in trouble over her lack of courtesy to the president while receiving an award.

Joining many to berate her, the footballer and son of the DSS, bodyshamed her.

Calling her action disgusting and disturbing, Abba described her as an ‘Orobo’ with zero sense.

He noted how Okonjo Iweala and other top ranking official, bowed their heads as a sign of respect to the president.

He questioned who the singer was to think she was more important than them.

Abba Bichi tweeted, “Orobo with zero sense even her excellency Okonjo bowed down her head as a sign of respect to the president and commander in chief of the armed forces likewise other high-ranking government officials. Who are you not to respect the president? This is disgusting and disturbing. Yoruba people are best known for their respect for elders but it got to your turn and you decided to be arrogant”.

recall that Teni, who was one of the honorees of the night, had sparked mixed reactions over her behavior at the ceremony.

In the video circulating online, Teni was seen bouncing as she took to the stage to receive her award.

Surprisingly, the singer didn’t pay courtesy to the president.

Her action didn’t sit well with many, as they took to Twitter to call her out. Many considered her behavior, disrespectful to the president.

Son of DSS DG, Abba Bichi, Under Fire as he showed public support to Obi Cubana following his arrest by EFCC

Son of DSS DG, Abba Bichi, Under Fire as he showed public support to Obi Cubana following his arrest by EFCC