Nigerian singer, Omah lay unveiled his latest single, Free My Mind today and shortly after, the reactions to the new song got him trending on Twitter.

Omah Lay unveiled his new single titled Free My Mind as he builds up to the release of his debut album and the reactions to the singer’s new single show that his fans love it.

Much attention is given whenever some African artists roll out songs and Omah Lay is definitely in that bracket. One would expect nothing less than a potential smash as the singer-songwriter discharges this mellifluous tune Free My Mind from his ever-loaded arsenal.

As we aggressively anticipate the release of his forthcoming debut album Boy Alone, Omah Lay gives us a clue on what’s coming. The record was produced by talented beatmaker, Blaise Beatz.

Fans of Omah Lay have been expecting the new single since his announcement this week, and the early reactions show an overwhelming majority love the song. Omah Lay’s last single, Understand is doing very well on the charts and the singer just completed an amazing US tour. Part of why he is trending as well is the conversation around why he wasn’t nominated for the MOBO Awards which was announced yesterday.

SEE THE REACTIONS BELOW: 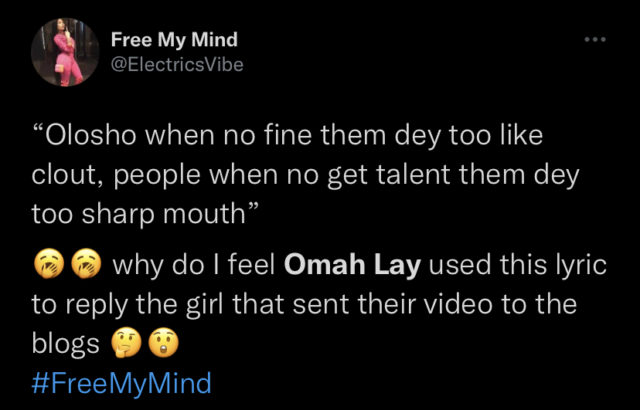