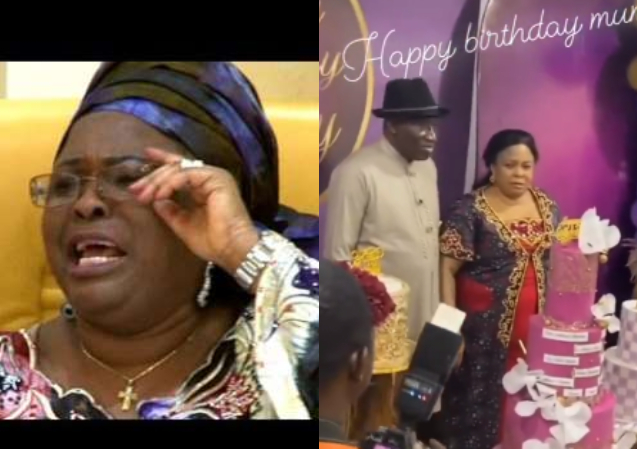 In a video that has now gone viral, Patience Jonathan is seen with her husband and former president, Goodluck Ebele Jonathan cutting her gigantic cake.

Nigerian public servant Dame Patience Faka Jonathan held the positions of second lady from 2007 to 2010 and first lady from 2010 to 2015.

She is the spouse of Goodluck Ebele Jonathan, a former vice president and president of Nigeria. She worked at Bayelsa State as a permanent secretary.

Some reactions culled by GISTLOVER below:

enelazarus1gmailShe looks adorable at 57, May God grant her Longlife in good health.

adeola.adetounI personally missed this our First Lady she is our first ajasa for comedy video. I also like how Ex President Jonathan adore her despite being an uneducated he never denied her and even made her the First Lady,some men would have gotten another woman to replace her, one of the reason why I like the man. Happy birthday mummy 😍

eze_richkingThe only First Lady we all know and recognized , if you like say whatever you want to say, I know u know her, not all this over serious ones who will see white and call it black 😂😂😂

luchyzbeautyThis woman was with us throughout in this country now we have the one that doesn’t identify with us.

2023:”After Voting For Looters, You Come Online to Beg Celebrities For Giveaway”– Peter Okoye Berates Nigerians

2023:”After Voting For Looters, You Come Online to Beg Celebrities For Giveaway”– Peter Okoye Berates Nigerians