Ghanaian dancehall act, Shatta Wale, has been arrested by the Ghana Police Service.

Shatta Wale was arrested for faking reports that he was shot by some unknown gunmen on Monday, October 18, 2021.

The Ghana Police Service confirmed the arrest today, October 19th, 2021, via their social media platform, and stated that additional information regarding the arrest of heavyweight Ghanaian Singer will be communicated. 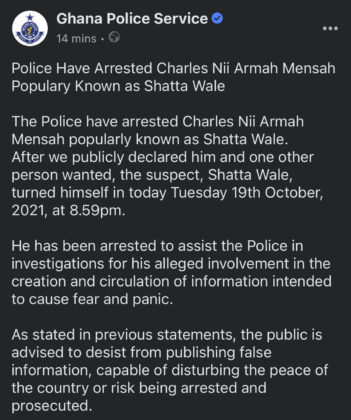 Shatta Wale, had earlier staged a prank after claiming that he was shot by some unknown gunmen, an action for which he later apologized to his fans and the people who were affected.

According to the dancehall king, he was responsible for the fake alert after taking the phones of his team members to post the fake news.

In light of the event, the Ghana Police Service has also arrested Shatta Wale’s Public Relations Manager, Kojo Owusu Koranteng, also known as Nana Dope, and Eric Venator, known as Gangee, on the basis of having the intention of causing fear and panic among the public.

Naeto C's Wife, Nicole Shares Hilarious Message to Him on His Birthday | READ