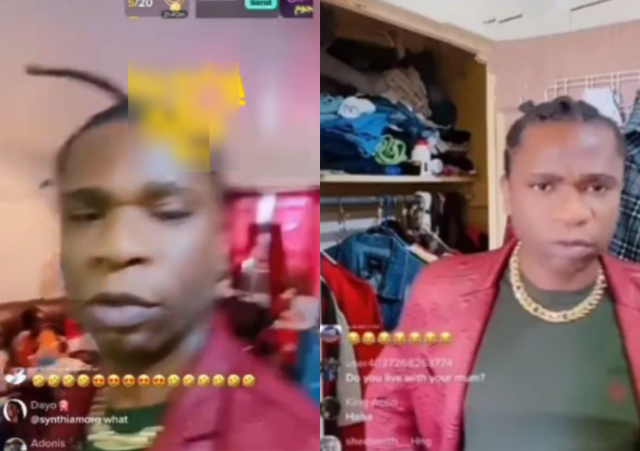 Darlington Okoye, popularly known as Speed Darlington, Nigerian internet personality and influencer, has been captured on tape trading words with a woman believed to be his mum.

She was correcting him for using foul language in the presence of little children while going about his usual social media rant.

The US-based artiste was addressing fans and followers via a live session on TikTok, and being that he made use of lewd, explicit words not appropriate for children’s hearing.

Speedy’s mother lashed out at him for not having the decency to make sentences without chipping in vulgar words.

He then responded that she should not expect him to stop doing what he is known for because children are around.

But this further angered her as she brought up hi past and noted how he would run away if police was called to arrest him.

Speed Darlington said he is not afraid of being arrested because he has been locked up several times.

He then wondered why she gave birth to him if she would continually attack him and issue threats.

The woman further cautioned him to behave himself in her house, saying that she does not come to his place so he should not come to hers if he wants to keep misbehaving.

The rapper then turned the camera towards her direction while it was still live and she immediately got up to interrupt the session.

“Why I won’t bring any Nigerian girl over to America” — Rapper, Speed Darlington Asserts

“Why I won’t bring any Nigerian girl over to America” — Rapper, Speed Darlington Asserts

Lady Tattoos Tunde Ednut’s Face on Her Thigh, Hours after Oye Kyme Confessed Her Love for Him

Lady Tattoos Tunde Ednut’s Face on Her Thigh, Hours after Oye Kyme Confessed Her Love for Him