Nigerian superstar, Davido has reacted to the verdict from the Lagos State investigation panel one Lekki Toll Gate massacre from the End Sars protests which took place last year.

Davido reacted to the news that the Lagos State Investigation panel has ruled that the Lekki Toll Gate massacre did infact happen, listing the full names of the victims. He shared his reaction via his Instagram stories on Tuesday, the 16th of November 2021.

Remember that on October 20th, 2020, the Nigerian military was dispatched to kill peaceful protesters during the # ENDSARS protest, a peaceful protest by Nigerian youths against police brutality, corruption, and other societal ills.

In an update of events, the Lagos State #EndSARS Judicial Panel on Police Brutality and Other Related Abuses submitted its report to the state government yesterday, November 15, 2021.

According to the reports, which were based on cases of police brutality and the October 20 Lekki massacre investigation, it stated that at least nine people were confirmed dead at the Lekki toll plaza on October 20, 2020.

READ ALSO: Falz Reacts To The Verdict Of The Lagos Panel On The Lekki Massacre | READ

Davido who was one of the leading figures during last year’s End Sars protests has asked what the next  step will be following the Lagos panel’s final verdict. 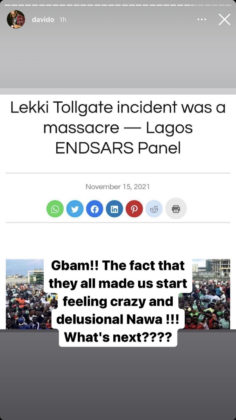 See Exclusive Moments From Zlatan's London Concert Held At The 02