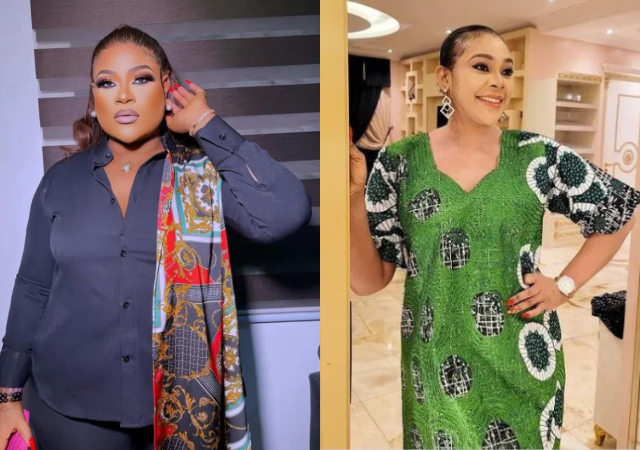 The socialite surprised many when she stepped out in style with her supposed new boo to an event.

You could recall that after her break up with MC Oluomo, Ehi moved on with businessman, Duro.

There had been speculations which made rounds that Ehi Ogbegor’s relationship was on the rock.

Gistlover revealed that Ehi had been dragged to court by the man’s ex wife and had been ordered by the court to be arrested for shunning the court’s rulings.

Ehi snatched the man, Duro from his wife and mother of his three kids only to discover that he wasn’t heavily endowed.

Making a u-turn, Ehi tried returning him to his ex wife but was shocked when his wife dragged her to court in New Jersey for harassment.

The post read, “I never even start debunking debunking don start. Wo make una lemme ooo, Ehi na waste of court be this ooo, na shame still dey make you post Duro as you don catch another prick, no be waste of snatching be this, you snatch person from her wife finish come discover say na small prick you snatch, now you wan return am the wife carry you go court, New Jersey, government order your arrest, all these wahala ontop prick wey you wan return swipe left to see one of the evidence”.

Sharing photo of him, she advised any woman married to him to speak out.

It remains unconfirmed if the new boo announced by GISTLOVER is the same as the new one being spotted with her.

Reacting to the news, many compared her with actress, Nkechi Blessing Sunday as they noted how the two ladies always change men.

Nkechi Blessing moved on from her ex, Mike Adeyemi with Ekiti politician Opeyemi Falegan and is now in a private relationship.

One luxury hair by yuwa wrote, “She no dey ever lack boo.. oh God what am I please??

One Diamond Joy wrote, “She and Nkechi de fall in love every 2 market days

One Jaunty Allure wrote, “Is it that she can nit stay without a man?