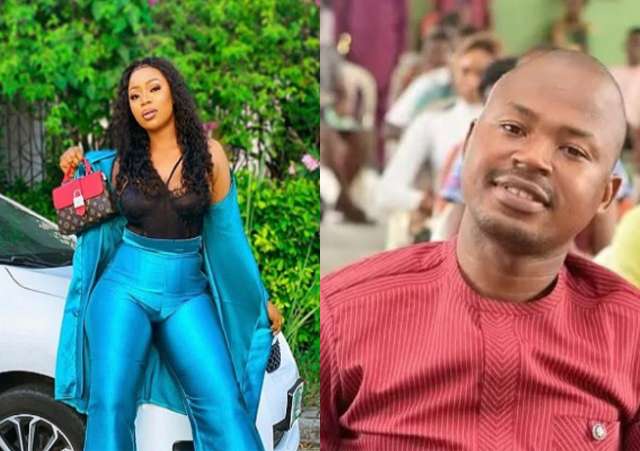 Remember that the skit maker had taken to her social media page some days ago to announce her maidenhood to all and sundry.

Meanwhile, Ovie Ossai has tackled her as he claims that being a virgin doesn’t necessarily make one a good wife.

The aide further noted that she’s putting her virginity at risking simply by announcing it since there are bad men out there who would want to take it from her.

Recall that GISTLOVER reported earlier that social media influencer and popular Nigerian skit maker, Amarachi Amusi, known as Ashmusy, has revealed why she kept her virginity intact despite temptations.

Ashmusy shared photos from her vacation in Ghana on her verified Instagram page. She disclosed how glad she was to have fulfilled a longtime promise of remaining a virgin till marriage.

However, she sent a hopeful message to her future husband, wishing he was worth the promise.

She wrote: I promised myself to remain a virgin till marriage 😍 I’m so glad I have kept that promise 😩 dear future hubby, I hope you are worth the wait 🥺

Ashmusy’s declaration has sparked drama online as some believe she was joking with her statement.

One Chidiadi wrote: Nobody wan marry virgin again oh😂. Strength and time no dey to dey teach person how to do.

Months back, Ashmusy revealed how she nearly lost her life while making a skit. She revealed that she nearly drowned in the process of shooting a scene at the see.

“Guys, I almost drowned in the sea. My life just flashed before my very own eye while creating content oo.

“Before they could send me a rope and save me, I was already going down. I was just saying, dear God, forgive me my sin and accept me into your blossom, please.

“The only thing in my head was my mom will cry so much. At a point, I forgave everyone I was angry with. I was ready to go. I just wanted to be free from the sun and meet God.

“This life is somehow ooo, make we no dey make am hard for each other. Anyone can go at any time.

“The reason I didn’t drown and die was because I held a boat with the tip of my finger.”

She later revealed that she had to go to the hospital after being saved because she drank too much dirty water.

“I trained my siblings in private uni, bought houses, ‘I’ve achieved so much at 26 without a man,’ – Ashmushy

“I trained my siblings in private uni, bought houses, ‘I’ve achieved so much at 26 without a man,’ – Ashmushy

“You go d!e if you cover up?, Looking for more clients?”– Fans react to Skit maker Ashmusy’s cleavage revealing post

“You go d!e if you cover up?, Looking for more clients?”– Fans react to Skit maker Ashmusy’s cleavage revealing post