“All your deep voice and you still no get sense, May is not happy”- Yul Edochie publicly embraces first wife, May [Video] 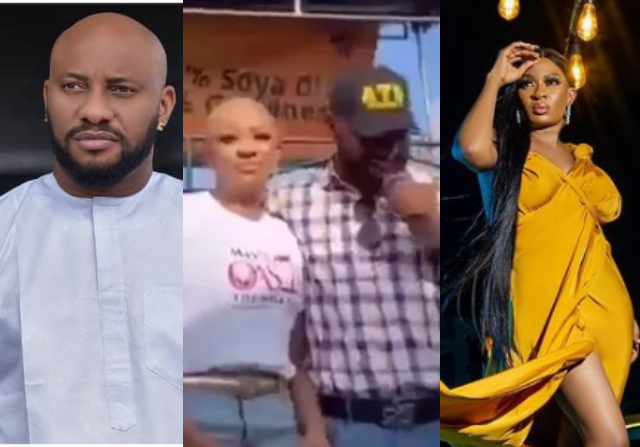 Quite controversial actor, Yul Edochie and his first wife, May Edochie, have been spotted in public for the first time since he took second wife.

Yul got married to colleague, Judy Austin and announced that he welcomed a baby boy with her few months ago.

After the news went viral the actor and his first wife reportedly fell out, though they occasionally shared social media posts talking about how the development and reactions affected them.

However, during her recently held birthday celebration, Yul could be seen holding her while addressing attendees.

Mayt turned a new age on September 16 and they organized a birthday celebration, which the movie star used as an opportunity to show that they are still together.

A video from the occasion shows him in an embrace with her as he addressed guests from a podium.

He stated that he and his wife were joined together by God and as such no man can put asunder.

But as he was speaking, May’s facial expression suggested that she was still not happy about how things turned out as she seemed to be forcing a smile.

My Family and Faith Is Against Polygamy, Heartbroken May Denies Reconciling With Yul Edochie

My Family and Faith Is Against Polygamy, Heartbroken May Denies Reconciling With Yul Edochie