“You are Mad” – Davido Slams His Cousin Again, Over Decision To Contest Against His Uncle

The singer is still causing a frenzy on social media, putting his cousin on blast over family political drama.

Afrobeats superstar David Adeleke, popularly known as Davido, is still putting his cousin on blast over a political drama that ensued in their family.

Recall that the DMW frontline act and boss, yesterday, January 18, 2022, took to his social media pages to slam his cousin, Dele Adeleke, for choosing to contest in the Osun State gubernatorial race against his uncle, Ademola Adeleke, who had contested for the seat before but lost.

Davido, who kicked against his cousin Dele Adeleke’s political ambition, described him as an unworthy leader and warned the people of Osun to beware, isn’t relenting as he took to his social media page today, January 19, 2022, to put his cousin on further blast.

According to Davido, his cousin paid some people to write an article about him which also referenced his late mum, a gesture at which Davido was angry about.

Although the cousin did state in a tweet that he knew nothing about the said article and would never disrespect Davido’s mum, who is his own aunty, Davido replied to his tweet by stating that he (Dele Adeleke) was mad. 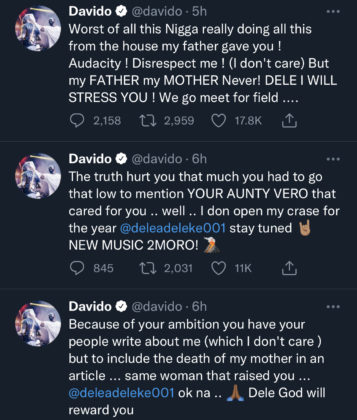 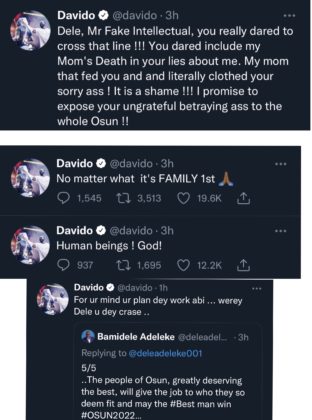