Wurld has revealed that the title of his very first song of the year will be Let You Down and he plans to release it as well as a new music video this month. He shared this via his Twitter page on Sunday, the 9th of January 2022.

Revealing the title for his next song will be Let You Down, WurlD also shared that it will be released this month as well as a new music video. He wrote via Twitter;

On the bright side, #LetYouDown Audio + my best video till date out this JANUARY 2022 WurlDwide 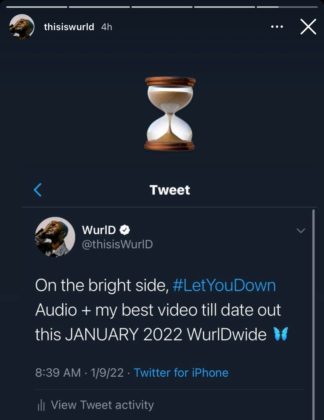 Brymo Parts Ways With Management After 8 Years Of Working Relationship