Nigerian superstar singer, Wizkid has released the scheduled dates and cities for his tour in North America, which will run from September 2021 till January 2022.

The singer shared the tour dates via his Instagram story on Tuesday, the 6th of June 2021.

The tour runs from September this year till January 2020 and will round up with a festival, of which the date has not been announced.

Wizkid will take a run from the 10th of September in Boston to Miami on the 16th of October.

Then he will come back in January for shows in Toronto and Montreal on January 21st and 22nd respectively, to round up the tour.

He also revealed that dates for the United Kingdom and Europe tour will be released very soon. 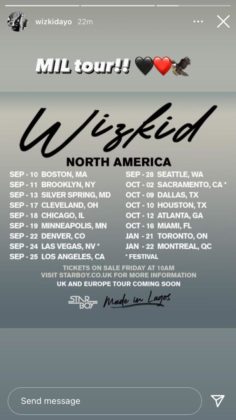 Wizkid announced his tour in North America as part of the grand tour for his latest album, ‘Made in Lagos’.

He has promised fans to bring the album to them and he’s doing that with this tour.