Wizkid has announced the indefinite postponement of his scheduled Made in Lagos tour which was supposed to take place in Canada this January.

Wizkid has revealed that the scheduled stops of his Made in Lagos Tour in Canada will no longer proceed this month and has been postponed indefinitely. He shared this via his Twitter page on Wednesday, the 19th of January 2022.

Wizkid embarked on the Made in Lagos world tour last year, performing in a number of venues across the United States and even held a 3-day concert at the famous O2 Arena in London. The tour was well-publicized with top celebrities like Rihanna, Kevin Hart, Alicia Keys, ASAP Rocky, and Swizz Beatz attending the tour venues.

The Canada Leg of the tour was supposed to hold this January with the singer billed to perform at venues in Montreal and Ontario.

Due to government rules concerning Covid-19 in Canada, Wizkid has now announced that his Made in Lagos tour stops in the country has been postponed indefinitely. He revealed that he will try his best to give his fans in Canada a show as soon as its possible again. 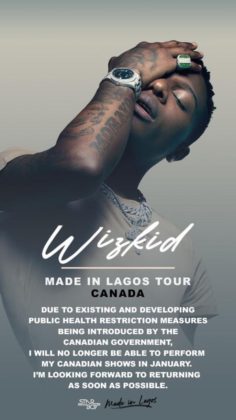