Nigerian singer, Simi has dropped a new song this morning titled Woman which many fans have commended widely with their reactions.

Simi‘s new song, Woman discusses the challenges faced by women in society and the reactions show that she knocked it out of the park.

Studio Brat frontier Simi shares the struggles of the feminine gender on her latest record.

It is a song about uplifting women as much as it is about pointing out the institutional barriers placed on them, Simi points out society’s unequal treatment while demanding a more equitable system.

Produced by talented beatsmith Vtek, Woman will go down as Simi’s third official single for 2021.

It serves as a follow-up to her previous record, Duduke French version featuring Deja.

With their reactions, music fans expressed that Simi really outdid herself on the new song, Woman.

The singer has been sharing series of demeaning words said to women via her Instagram page in the past few weeks.

The new song aims at pointing out how wrong it is to demean women with words for things beyond their control. 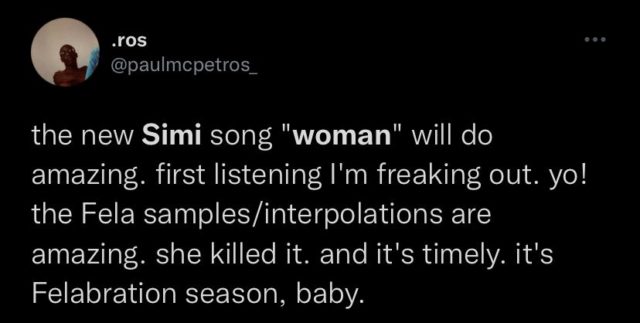