Nigerian singer, Simi has revealed the details for her headline concert, Can You Simi Now billed to hold in Lagos this December.

Simi has unveiled the details for her headline concert tagged Can You Simi Now slated to hold at the Muri Okunola Park in Lagos. She shared this via her Instagram page on Sunday, the 5th of December 2021.

Simi was not active on the music front earlier this year but has now dropped two amazing songs in quick succession. First it was the socially conscious Woman which spoke about the ugly hand that the feminine gender has been subjected to in the society. The other single which was released on Friday is the Joeboy-assisted So Bad.

Announcing her first headline concert in two years, Simi shared the flier for the event which holds in Lagos on the 28th of December at the Muri Okunola Park. She wrote;

#CanYouSIMINow LIVE In Lagos with the Banjos!!! 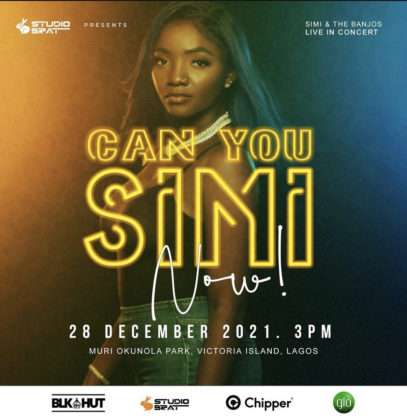