“Must Be Crack” – Burna Boy And Yonda Clash After Viral Video

Nigerian singers, Burna Boy and Yonda seem to be having a clash as the latter has reacted to a comment made by Burna on his recent video interview.

Yonda reacted to a comment by Burna Boy who responded to a claim by the ex-DMW singer in a new video that a song written by him caused the rift between Burna and Davido. He shared this via his Instagram stories on Saturday, the 4th of December 2021.

Yonda used to be signed to Davido’s DMW Records and is widely regarded as one of the best songwriter in the country. He is credited with a good number of writing credits on Davido’s songs and still retains a good relationship with his former label boss. He even featured on his 2019 album, A Good Time on the song titled Anifowoshe.

In the video, Yonda was quoted as saying that he wrote a song which was meant for Burna Boy but Davido took it and that was the genesis of their fallout. In response to this, Burna Boy commented under the post saying, “Must be crack” 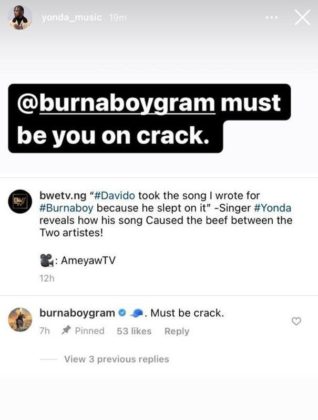