Beats By Jayy, who was a prolific producer, rapper, and singer, was announced dead on Sunday, November 21st, 2021 at the age of 27 after having COVID-19 complications.

Before his death, Beats By Jayy was a regular collaborator with the likes of M.I Abaga, AQ, Blaqbonez, and Loose Kaynon. He has also produced songs for the likes of iLLBliss and was the major producer on Cheque’s debut album, Bravo. At the time of his death, the veteran producer was working on his fourth body of work. Beats By Jayy also produced M.I Abaga’s 2020 EP, Judah, AQ’s Headies-winning album, God’s Engineering, as well as the popular LAMB Cyphers, which rocked the hip-hop scene in 2019. In his lifetime, the Surulere-born artist released three EPs: the Replay Value EP in 2017, the Road To Jaynius EP in 2019, and Jaynius in 2020.

In a bid to honour the late beat-maker, M.I, AQ, Loose Kaynon and Blaqbonez have announced that another LAMB Cypher will be released this Friday, December 10th 2021.

Taking to their social media stories, all four heavyweight rappers urged their fans to anticipate the Cypher. 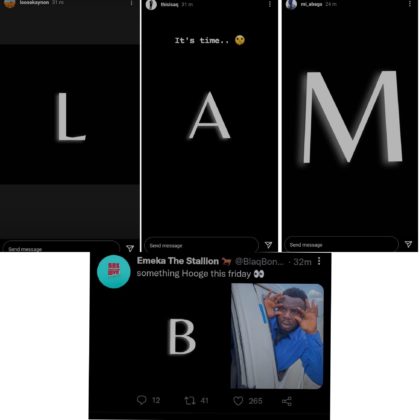 The first and second LAMB Cyphers no doubt shook the Nigerian hip-hop scene when they dropped, and we are eagerly anticipating the third, especially because it is a tribute to the legendary Beats by Jayy.

Reactions Trail CKay's Latest Singles 'Emiliana' & 'By Your Side' | SEE