Fireboy’s ‘Peru (Remix)’ is currently at number one on the Apple Music Chart in London.

The Afrobeats star who recently dropped the remix for ‘Peru’ featuring Grammy Award-winning singer Ed Sheeran is already making waves with his decision to put the UK act on the remix.

Fireboy DML recently announced that the official video for the song has hit 5 million views and it gets better as the song has now overtaken hits like Adele’s ‘Easy on Me’, Mariah Carey’s ‘All I Want for Christmas is You’ and a host of other songs to become the number one song on Apple Music’s Top 25 Songs in London.

Interestingly, the original version of the song, which was leaked as a freestyle, also made the chart, sitting comfortably at number 15. Also, the remix made it to the top 10 position of United Kingdom’s top 100. 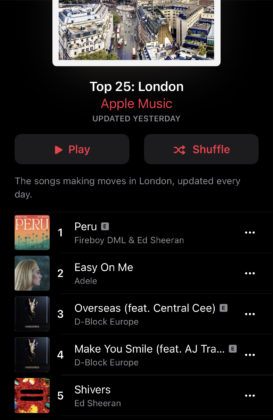