Nigerian singer, Fireboy DML has announced the details for his very first headline concert in Lagos tagged “The Fire Concert” which will hold on the 2nd of January next year.

Fireboy has revealed that his debut headline concert in Lagos has been tagged “The Fire Concert” and will hold on the 2nd of January next year. He shared this via his Instagram page on Tuesday, the 7th of December 2021.

Fireboy DML had promised his fans a new album this year but that is already looking like a dream as the singer has not dropped anything since his smash hit, Peru that was released earlier this year.

The singer also recently announced the details for his Apollo US tour including dates and venues for the tour in 2022. Apollo is the title of Fireboy’s sophomore album which was released last year. He will visit visit cities like New York, Chicago, Houston, Dallas, Denver, and Los Angeles on his month-long tour.

Announcing the details for his debut headline show tagged The Fire Concert, Fireboy writes via his Instagram page;

about time; my first headline concert at home, with my people. you already know it’s going to be beautiful. tickets out on Monday, the 13th of this month. 🖤 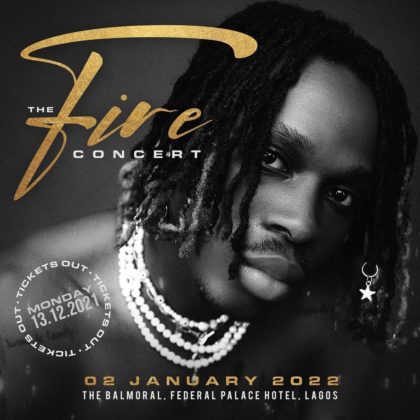 Davido Set to Kick Off 2022 With New Crib | SEE DETAILS