Apple Music has released a list of the most played songs in Nigeria this 2021 with notable names like Essence, Ginger, Bounce, and more making the cut.

The new playlist by Apple Music is a compilation of the 100 most played songs in Nigeria for the entire year 2021. The list was shared on Tuesday, the 3rd of December 2021.

2021 has been amazing for African Music, specifically Nigerian music and its export to the world. So many songs that did quite well this year have been added to this list by Apple Music.

At the top of list for most played Apple Music songs of 2021 is none other than Essence. The Wizkid and Tems collaboration proved to be the song of the year, not just in Nigeria but globally. The song was followed by another track from the Made in Lagos album, Ginger which features Burna Boy. The third song on the list in the monster hit by Jonzing Records singer, Ruger titled Bounce.

Other songs on the list include Davido‘s The Best with Mayorkun, Ladipoe and Buju‘s Feeling as well as Olamide‘s Infinity with Omah Lay. 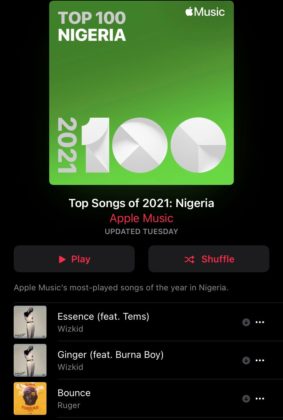 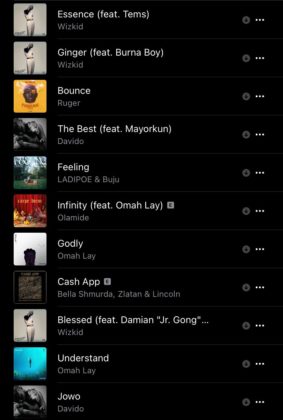