Davido has shared a photo of a new tattoo he has just inked on his body in honor of his late friend and business associate, Obama DMW who died earlier this year.

In a new photo shared by Davido recently, he shares a new tattoo on his arm which was gotten in honor of his late friend, Obama DMW. He shared this via his Instagram stories on Wednesday, the 8th of December 2021.

Obama DMW died on the 29th of June after driving himself to the hospital, shortly after complaining of chest pain. The late music executive was a very close friend of Davido and an integral part of his DMW record label. After Obama’s death, Davido took it hard and went off social media for a while. The only time he was spotted in photos or video, he was eulogizing his late friend.

In the photo Davido shared on Instagram today, he is showing off his new tattoo which is an inscription of the phrase “44 O fe rege” in honor of Obama DMW. The singer also recently got a frame made with a picture of him and Obama in it.

SEE THE PHOTO BELOW: 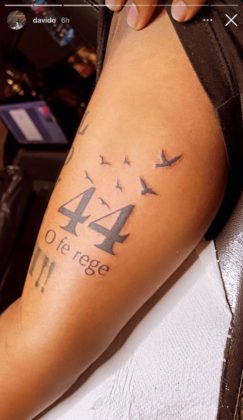