Nigerian singer, Davido has revealed that the 250 million Naira realized from his birthday request a few days ago will go to orphanages around Nigeria.

In a new post, Davido outlined his reasons for giving out the 250 million Naira to orphanages, explaining that he intends to do the same thing every year. He revealed this via his Instagram page on Saturday, the 20th of November 2021.

On Thursday, Davido put out his account number on his social media pages, asking his friends and fans to send him 1 million naira each. Immediately, the funds started rolling in and he got 40 million naira within 2 hours. The amount that was raised in two days ran into 200 million naira and the singer has decided to add his own money and do something worthwhile with it.

READ ALSO: Davido 1m Challenge: Every Musician that Sent Him Money and Why

Speaking in a statement he released, Davido revealed that he has put together a disbursement committee that will see that the 250 million gets to the orphanages. The DMW hitmaker just released his first official single of the year titled Champion Sound which features South African rapper, Focalistic. He revealed that the fundraising started as a joke and it was amazing to see how much people love him. 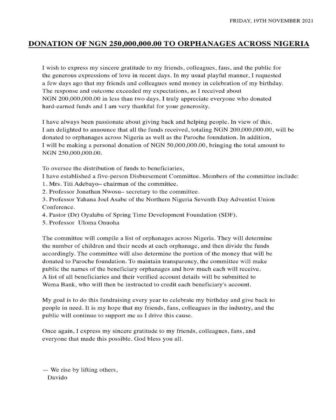 WATCH THE VIDEO BELOW: