Burna Boy Shares Update on His Relationship With Davido | READ

Burna Boy has revealed that himself and Davido have sqauashed their beef and their relationship is back to normal terms now.

Burna Boy revealed in a recent post that he and Davido have settled their differences and their relationship is as good as ever. He shared this via his Instagram page on Friday, the 31st of December 2021.

Burna Boy revealed this shortly after reacting to Ghanaian artists; Shatta Wale and Stonebwoy’s recent comments on him and his fellow Nigerians. The African Giant stated clearly that it was all a lie and stressed that all he is interested in is the unity of the African race.

Burna Boy and Davido’s relationship has been strained for a while now and there have even been rumors of them taking shots at each other in their songs. During his Bounce interview earlier this year, Davido claimed not to have any idea on why they are fighting.

Revealing their their fight is now behind them, Burna Boy wrote via his Instagram stories, “FYI I have no issues with David. We good now.” 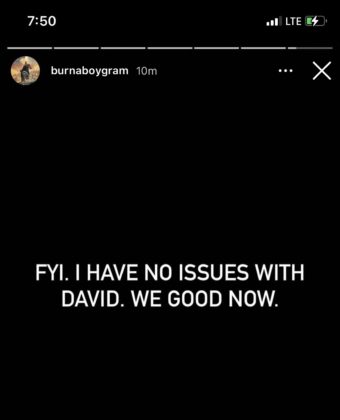 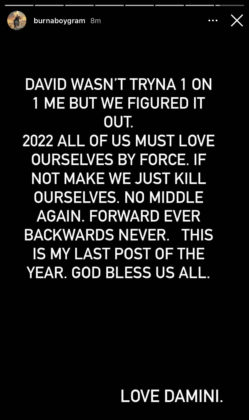