"Blaqbonez and Oxlade Made Magic!" – See Reactions to the 'Sex Over Love' Deluxe Album

Nigerian rapper, Blaqbonez dropped the deluxe version of his latest album, Sex Over Love with the addition of 5 new songs and the reactions show it was worth it.

In the reactions, Fans commended Blaqbonez for the features on the Sex Over Love Deluxe album like Oxlade, Bella Shmurda, and Kida Kudz. The album was released on Friday, the 26th of November 2021.

After the successful release of Sex Over Love, a debut album by rapper and singer-songwriter Blaqbonez which peaked at #1 on Nigeria’s Apple Music’s top album charts, the Chocolate City rapper has released the deluxe edition of the album.

The project consists of several of Blaq’s popular records such as “Haba”, “Bling”, “Fendi” and “Okwaraji” including 5 new additional tracks with lots of electrifying features. On the deluxe version of the project, Blaqbonez invokes a strong continental impulse across all tracks. The deluxe version encompasses additions which are remixes to a couple of his old hit songs and a brand new song which he enlisted Oxlade on.

The reactions show that Blaqbonez did a really great job on the Sex Over Love deluxe album, giving his fans another amazing experience. 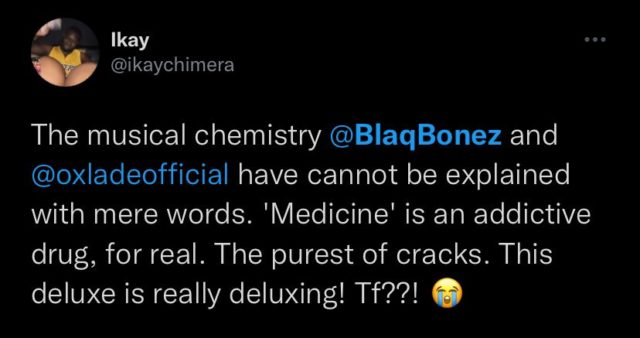