On the latest episode of the BBNaija “Lockdown” Reunion show, Tochi was the center of attraction as he got into a war of words with his former housemates.

The latest episode aired on Tuesday, the 29th of June 2021. Tochi argued extensively with his fellow BBNaija housemates especially Dorathy and Ka3na.

Lucy and Dorathy started it off by talking about how Tochi contributed little to the house.

Then Tochi and Ka3na had a back-and-forth where he said he felt like she made him feel somehow whenever he asked for food.

Dorathy said she felt Tochi always waited for her to greet him in the house, to which Tochi retorted, “Who the h**l are you?” Lucy also said Tochi was following the Ozo-Nengi-Neo-Vee clique around and he wasn’t really part of it.

Tochi asked her, “So you came into the house and sat down? You didn’t move around? Am I a statue?”

It appears Tochi had a lot on his mind to say about his former BBNaija housemates on this episode and he did not hold back.

Reactions have been flooding social media since the episode ended. Some people hailed Tochi for speaking his mind.

Another set felt Tochi only had so much to say about the women in the group and he did not attack the men as much.

Popular OAP, Do2dtun expressed that Tochi had kept a lot of venom in him for the reunion show;

They hurt Tochi so bad 😂😂😂
He kept his venom till this reunion. #BBNaijaReunion

Another Twitter use @ebelee_ said she does not like the way Tochi shouts down on the women in the show;

I don’t like the way Tochi gets so comfortable shouting down at the women. Nigga you’ve been chatting shit for consecutive episodes. Pipe it 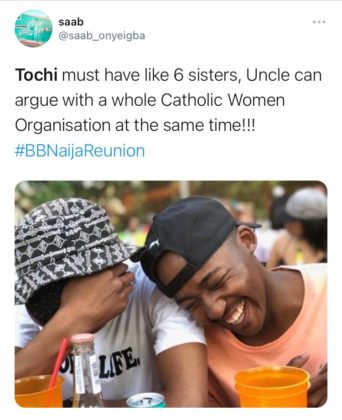 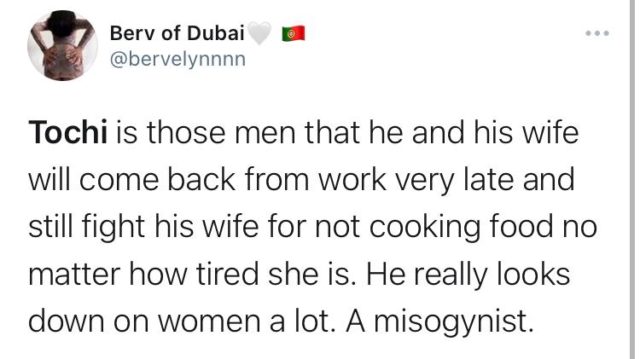 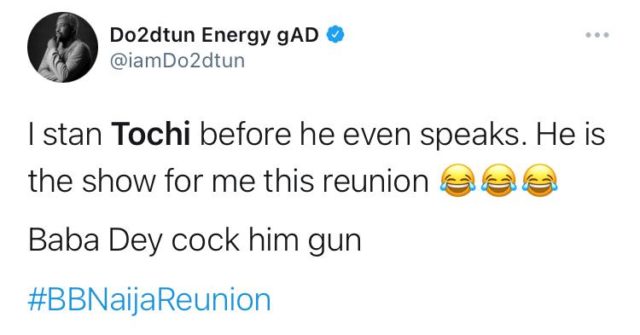 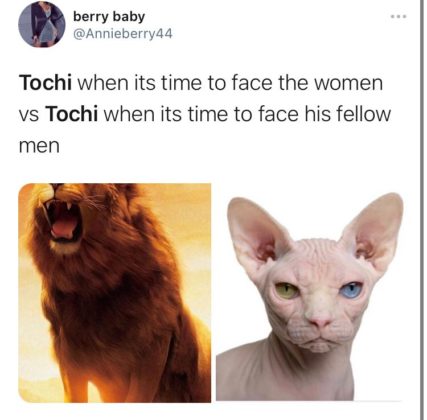